Why are we building an NVM Library? Where does it live? How does it work? This blog entry provides some answers, which refer to this picture showing the overall library architecture: 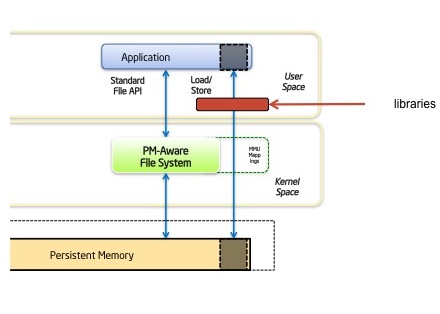 The operating system exposes persistent memory to applications as a memory-mapped file, using a persistent memory aware file system as shown in the picture. But that’s a very raw form of access. Stopping there would be like telling applications they have all the dynamic memory they need because the OS provides the sbrk(2) system call. Just as libc and most other language run-time environments provide memory management APIs like malloc(3) and free(3), which build on the raw interfaces like sbrk(), we need to do something similar for persistent memory. Memory-mapping a pmem file gets you direct access, but then you will want to carve it up into data structures and update it in a way that remains consistent across system interruptions.

So why isn’t the answer just to provide a version of malloc() and free() that allocates from the system’s pool of persistent memory? Because those interfaces don’t comprehend the idea of persistence. If a program allocates a blob of memory using malloc(), but dies before linking anything to it, that memory is a persistent memory leak and the pool is then inconsistent from that point on. With volatile memory, that’s not an issue since it starts from nothing each time the program runs. But for persistent memory, we need a pmem-aware malloc() library to make it useful.

Another aspect of the where question is what types of persistence does the library support? The intention is that the NVM Library will work on top of any non-volatile memory, not just persistent memory. By writing a library that is optimized for persistent memory, but that behaves reasonably on other types of NVM (like SSDs), there’s a good chance that applications can use the library for both configurations and be simpler as a result. (This is why the library is named the NVM Library and not the PMEM Library, by the way.)

Researching persistent memory aware algorithms and making the best architectural trade-offs is a big part of this project and that work is underway. So we don’t have all the answers yet on how the library works. Some parts of the library are functional, other parts are still being designed. Check out the NVM Library page for the latest man pages which describe the APIs available so far.