We’re closing out 2017 with two big improvements to pmemkv: support for multiple storage engines, and an improved benchmarking utility based on db_bench. These changes set the stage for some interesting experiments to come next year, as we continue to add new features and tune performance of pmemkv and its utilities and bindings.

A new virtual interface (KVEngine) was recently introduced that allows pmemkv to provide multiple storage engine implementations, without changes to utilities or language bindings or applications using the pmemkv API. 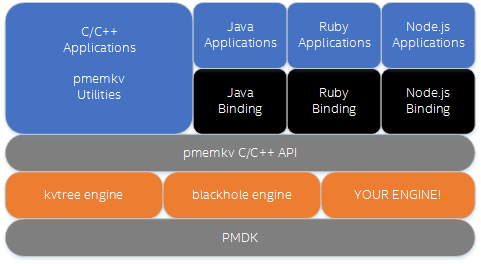 There are two typical motivations for creating a new engine:

Initially pmemkv supports two engines – kvtree for the original single-threaded hybrid B+ tree, and blackhole for an engine that accepts data but never returns anything. The blackhole engine is particularly useful for testing the overhead of high-level bindings. The kvtree engine is used by default when no other engine is specified.

There are several new engines that we’ll be auditioning in 2018, including copy-on-write and multi-threaded implementations. Engine contributions are always welcome if you have an idea to try!

Our original pmemkv_stress benchmarking tool has proven quite useful for assessing performance, but has some limitations:

The outcome of these limitations is that pmemkv_stress results can be difficult to line up with standard db_bench or YCSB benchmark results that we see published elsewhere.

One of the best new features here is using --histogram=1 to generate statistical histograms for each benchmark operation. These include mean, median and detailed tail latency data, which is all highly informative for benchmarking and tuning.

We chose to port db_bench from LevelDB (even though the RocksDB fork has some nice additions) because of license compatibility. LevelDB is BSD licensed (like all of PMDK) where RocksDB is GPL.

The pmemkv_bench utility relies on significant code ported from LevelDB. This code is located in a new leveldb source directory, with all original license and copyright headers intact. The only modifications to these files are minor cosmetic changes (to defines and includes) allowing this subset of LevelDB files to be built independently of the entire LevelDB distribution.

Although pmemkv_bench relies on LevelDB sources, no LevelDB source code is used in other pmemkv utilities or bindings or shared libraries.

We are grateful to Google for this LevelDB code and for choosing such a permissive license for its use.

If you’re using an old version of pmemkv then you really should consider moving to the latest build to get multi-engine support and the new pmemkv_bench utility. (and be sure to use --histogram=1 for your future benchmarking!)