An early project done with the NVM libraries was adding persistent memory support, both volatile and persistent mode, into the Apache Kudu storage engine block cache. This project required modification of existing code.

My repository, noted above, has the source for both modes integrated into the kudu project.

The high level goals of this project were:

There were several things considered when designing the integration of PMDK into Kudu:

Why these design differences?

In hindsight I would go back and use the KeyValue structure for both volatile and persistent mode support and keep the LRUHandle in DRAM in all cases.

I never considered putting the hash table on persistent memory. I didn’t feel there was a need to do this to reach the goals of the project.

Tablet A tablet is a contiguous segment of a table, similar to a partition in other data storage engines or relational databases. A given tablet is replicated on multiple tablet servers, and at any given point in time, one of these replicas is considered the leader tablet. Any replica can service reads, and writes require consensus among the set of tablet servers serving the tablet.

Master The master keeps track of all the tablets, tablet servers, the Catalog Table, and other metadata related to the cluster. At a given point in time, there can only be one acting master (the leader). If the current leader disappears, a new master is elected using Raft Consensus Algorithm. 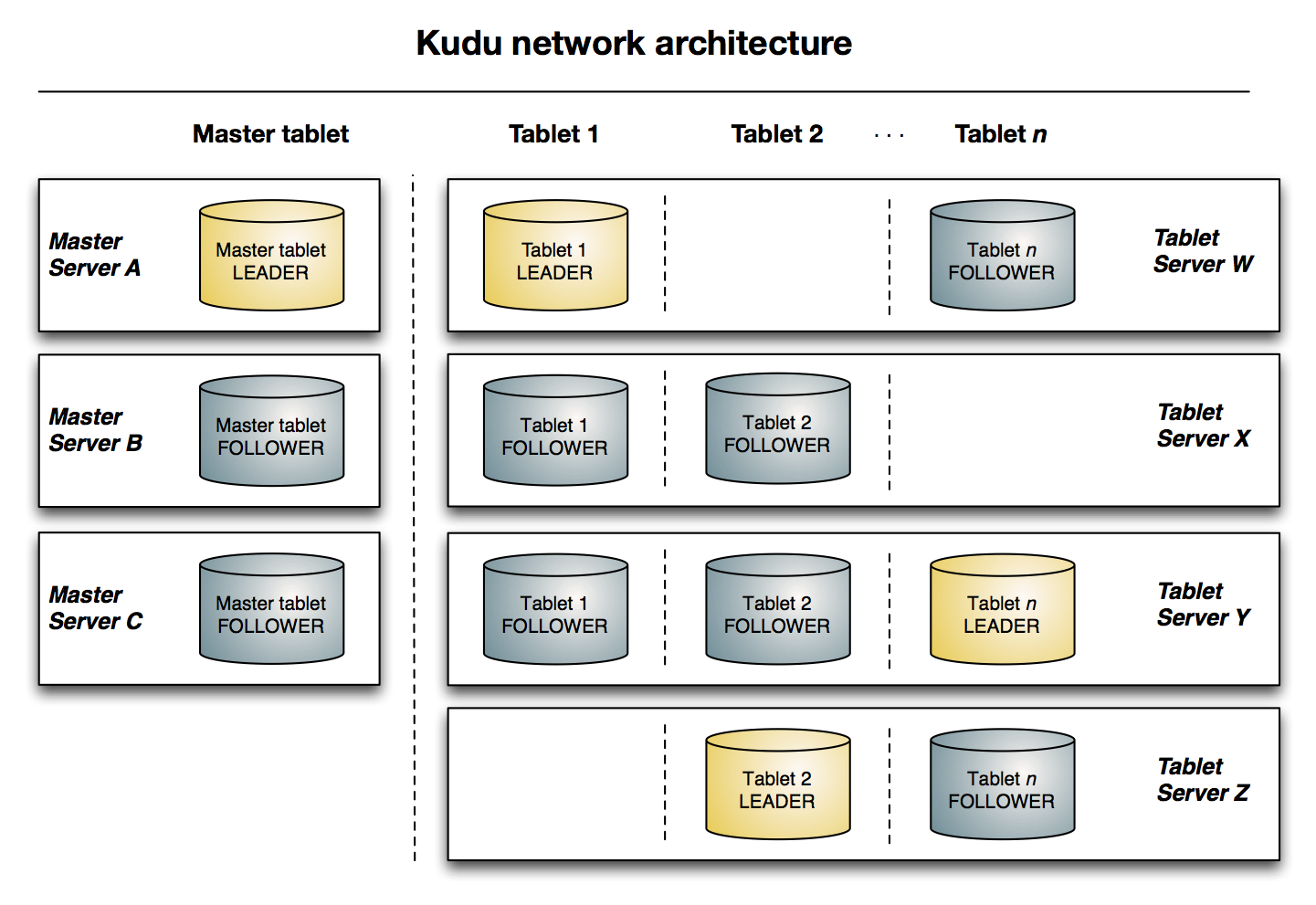 As part of every tablet server Kudu provides a LRU block cache. Conceptually the design looks as follows(with the inclusion of persistent memory support):

Each tablet server has one block cache. The Kudu Block Cache is an interface that maps keys to values. It has internal synchronization and may be safely accessed concurrently from multiple threads. It may automatically evict entries to make room for new entries. Values have a specified charge against the cache capacity.

The rest of this blog post addresses the details of the Persistent Mode support.

To Transact or not to Transact

In general terms, transaction processing is information processing that is divided into individual, indivisible operations called transactions. Each transaction must succeed or fail as a complete unit; it can never be only partially complete. Using the transactional object interfaces in libpmemobj allows the programmer to worry less about the consistency of the data in the event of a failure. As long as the transactions are coded correctly it is guaranteed that anything inside the TX_BEGIN and TX_END block using libpmemobj are indivisible operations. They either succeed or fail as a whole.

For the Kudu block cache I chose to use the atomic memory allocation rather than transactions. Why? There were a few reasons doing it this way made more sense for this application.

The Kudu block cache has a hash table of the LRUHandle entries. 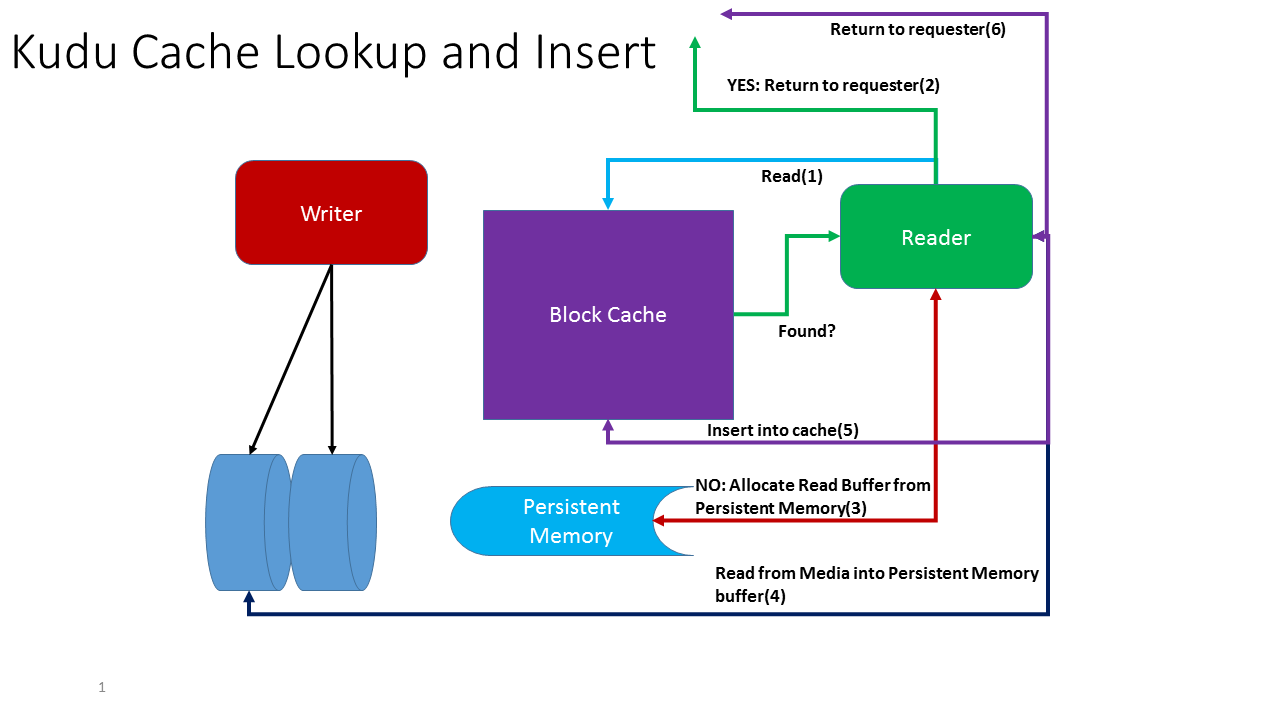 With atomic memory allocation a constructor is required to ensure that the initial memory allocation is done atomically as defined by the user. I have defined atomic in this case to be: a) creation of the KeyVal structure, setting kv->valid = 0 and then persisting the value of kv->valid to ensure that until this bit it set to 1 this KeyVal instance is not considered valid.

At this point the memory has been allocated, the key and value data have been written, not persistently however, prior to insertion. Persisting the structure and its data is delayed until this point because until the entry is inserted into the cache it is not valid. The largest size to persist is the data itself so persisting the whole structure at one time as opposed to smaller parts does not result in performance degradation.

Failures can occur at any point in time during the operation of the application. At all time prior to setting kv->valid = 1 and calling pmemobj_persist() the entry is not considered valid and upon restart will be discarded.

Restart of Tablet Server and Repopulating the Cache

Lastly I want to discuss how the cache is repopulated in the event of a shutdown and restart of the tablet server. At cache startup the cache creation code looks for any existing entries and iterates over them to repopulate the volatile data structures associated with the valid persistent cache entry.

This code is fairly straightforward to read. I simply iterate over the object type I am interested in, which is a ‘struct KeyVal’, and look for entries that are marked valid. Any entry found that is not marked valid is discarded.

There were three high level goals stated at the beginning of this blog post, High Level Goals. The next post will provide details on the performance and DRAM reduction using the PMDK libraries to enable persistent memory support in the Kudu block cache.